Or so I thought? 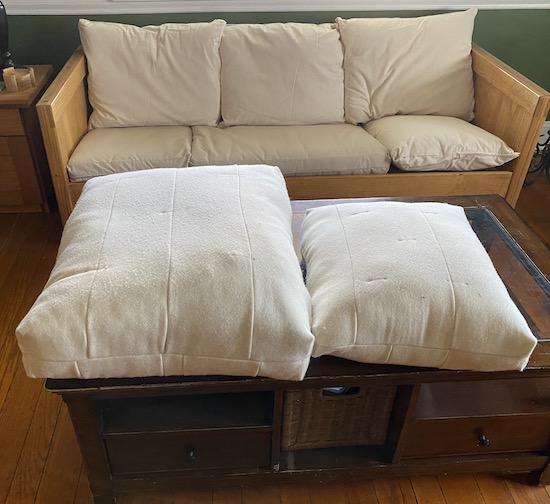 I bought these wool cushions because the company claimed they were certified 100% organic with no chemicals involved in any stage of the process. I removed the tags and resewed where they were attached. The tags always contain chemicals and this applies to almost every organic product I buy. But I found something else I didn't expect.

We put the pillow cushions on our This End Up style wooden couch in replace of the synthetic memory foam cushions that came with it. It was a big improvment over the old cushions, however every night when I would sit on this "100 percent organic pillow", leaning against my husband with my feet up on the couch, my toes would get numb with shooting pains, something that happens when I come into contact with the chemical benzene. I couldn’t figure it out. I kept checking the area around the couch not really thinking to carefully inspect the pillow. But then I saw it. My toes were resting on top of the string they used to make the cute little crimps. That string had silicone softeners added to it. This makes the pillow not 100 percent organic. The low laying VOCs build-up seeping deep down into the stuffing. No wonder I could not sit still. The pillow was slowly getting contaminated by the strings.

At first I thought it was just the decorative crip on the flat areas of the pillow. I could remove that with no problems.

Then I saw it was also the string on the end where they put the stuffing in. I could just remove that section and resew it with true organic string.

But as I made these alterations I realized it was not just the string, but also the thread on the entire pillow!

This company proudly calls their products U.S. and GOTS-certified organic, even stating, "When washing the certified-organic wool, a natural wool keratin soap is used".

One would think if a company went to the trouble of making this type of product they would also invest in an all natural string and thread. So close, but not. they neglected to use chemical-free thread and string to sew it all together. Perhaps this was just a one time oversight on their part where someone in the company accidentally ordered the wrong materials not realizing it. I honestly do not know, but am hoping that is the case.