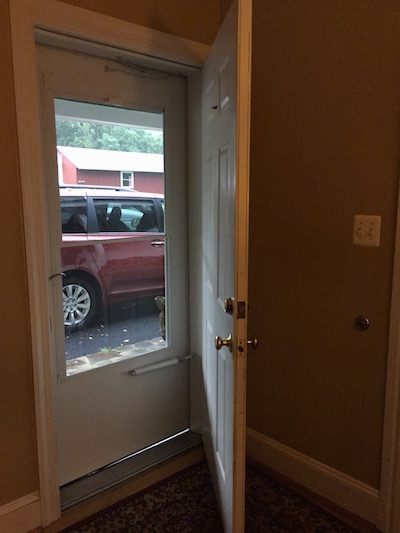 Houses often have two doors, a storm door and a door that leads into the home. When exterior wall doors are installed they often line any gaps with fiberglass insulation. When one of the doors is opened it creates a suction and pulls out microscopic fiberglass particles into the air through any cracks in the frame.

The older and/or more weathered the fiberglass insulation gets the higher the chance of it getting into the air. Brand new insulation, doors and door frames freshly installed correctly are less likely to leach out, however the materials do not stay new forever. Eventually, the materials age and the house settles. The suction of the doors being opened can pull the fiberglass out of the walls and into the air.

When this happened in our house after installing a storm door my first thought was an outdoor allergy when opening the front door in the morning. However after becoming very aware of the effects airborne fiberglass has on my body I started paying attention to exactly when and where I would feel it. It would also happen when I would return home. The air outside was fine, but the air between the doors was not. If I opened the window in the storm door the air between the doors seemed like normal air. It was when it was all sealed up and one of the two doors was opened that I felt it. This was because the suction was strong between doors when one was being opened while the other was still closed. It sucked it right out from the walls. It's always much worse in the summer and on humid days.