Fiberglass Coming from the Walls 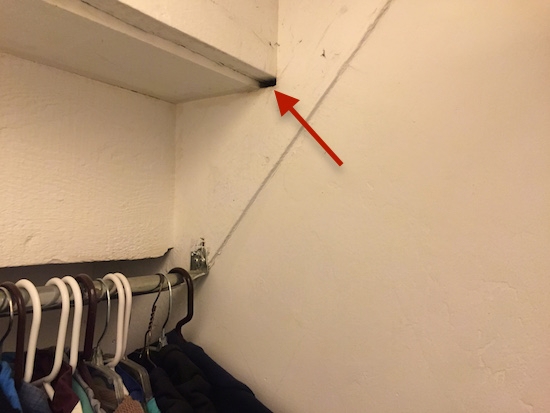 This is a hole in the wall inside of my bedroom closet. When my clean clothes were hung up, not worn in a while I would often put something on, start to cough and think, this thing is dusty. There must be dust mites all over it and I would toss it back in the hamper unworn. Again, the blame went to dust mites. After realizing the true culprit of my asthma was fiberglass insulation I became more aware of my surroundings. When I opened my closet door and for a second I felt the feeling I get when I breathe it in, I stopped and looked around. I noticed a hole in the wall. There was a cobweb near the hole that was dancing in the air movement coming from the hole. Above my closet is the third floor and between the third floor and the ceiling of the second floor is a layer of blown in insulation. Wow, all this time the 'dust mites' I had blamed was fiberglass insulation once again. Now that I think about it, dust mites do not even make sense. The little creatures do not just appear on freshly washed clothing which are hung up. They eat dead skin and there is no dead skin on a clean article of clothing. Therefore a nest of them would not gather on a shirt hanging in a closet. 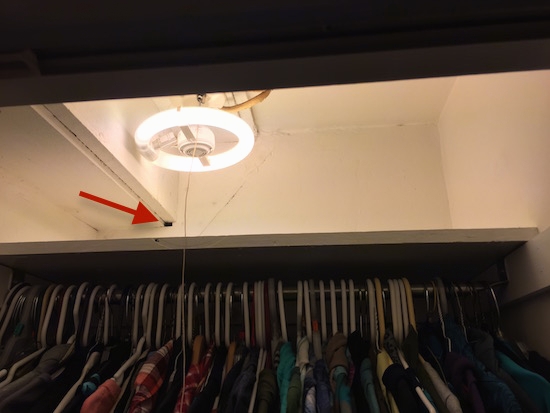 Another hole in the wall above the shelf. Thankfully the house was built in the late 1800s and therefore has limited fiberglass insulation. It only has what was added as additions and repairs were made. Unlike most other homes, it is not behind every exterior wall. If it were, I would have a bigger problem.

I removed all of my clothes and took them to the laundry room. As I took shirts off the hangers I began to cough. My chest ached and I started feeling sick. I had to take breaks to turn and breathe better air as I gathered them. When the closet was empty I saw more cracks and holes in the walls. 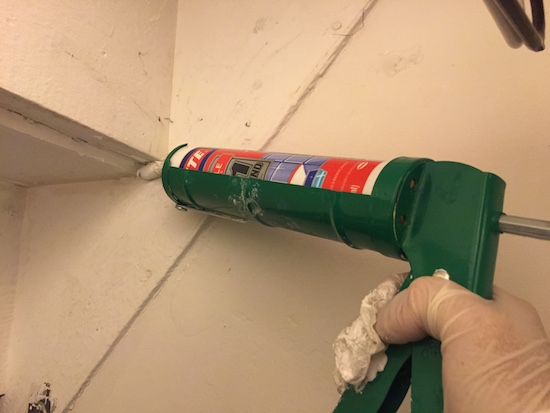 I caulked the holes and cracks, but in the end I had to throw out most of the clothes that were hanging in the closet near the holes. There were some things in there that I never wore because when I would pull the article of clothing off of the hangers with an intention to put it on, it would seemed too dusty to actually wear. After washing everything 4 times on the extra water setting without being able to get the stuff out, I just tossed it. 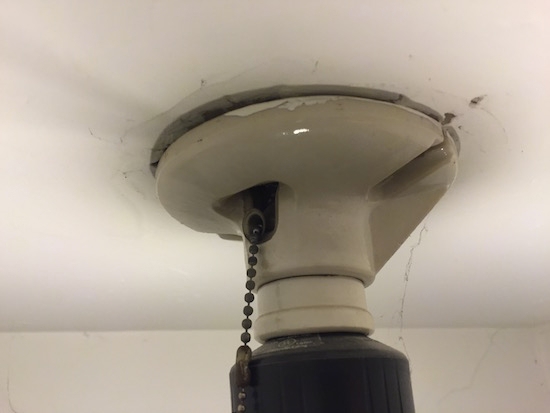 I then checked all of the bedroom closets and caulked any holes and around the light fixtures. Thinking back, I remember a day when my daughter was putting laundry in the washing machine. She had told me that if her clothes hang up too long the dust mites bother her. Hmmmmm... I am begining to think dust mites, while they are indeed nasty little buggers, take the rap a lot. Microscopic fiberglass particles were also outgassing under the bathroom sink where the pipes come in. I caulked those cracks along with any other crack or hole I saw around the sink area.

I knew that fiberglass can escape through the holes in the outlets and light fixtures, but I didn't even think to look for cracks or other types of holes in the walls. I am going to be buying a lot of caulk. 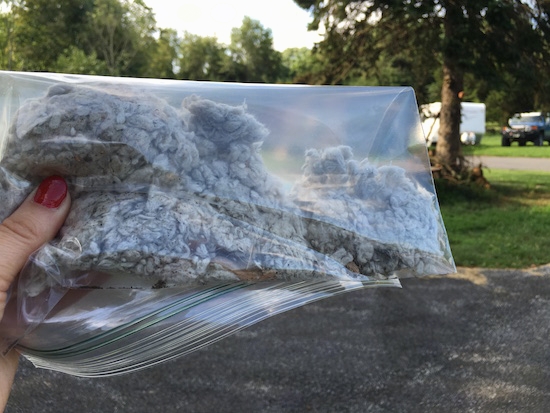 Our attic has three rooms that you can stand in and we use it as storage. This is what is between our attic floor and the second floor ceiling. We sent a sample away to a lab to see if it is asbestos. Whatever it is it makes my throat hurt, chest ache, eyes burn and skin numb.

The lab results came back. The gray material is 97% glass wool. Glass wool is another name for fiberglass. 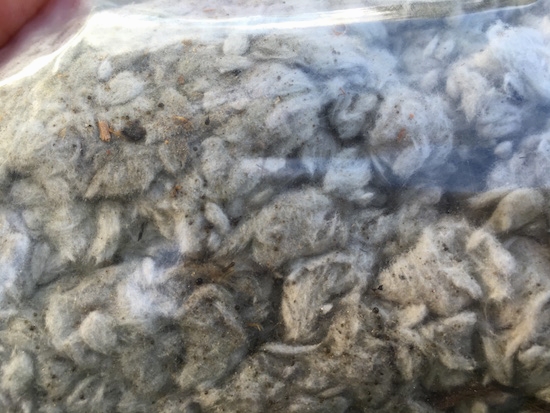 The question is, can the blown in fiberglass insulation between the ceiling and the floor get into the air? 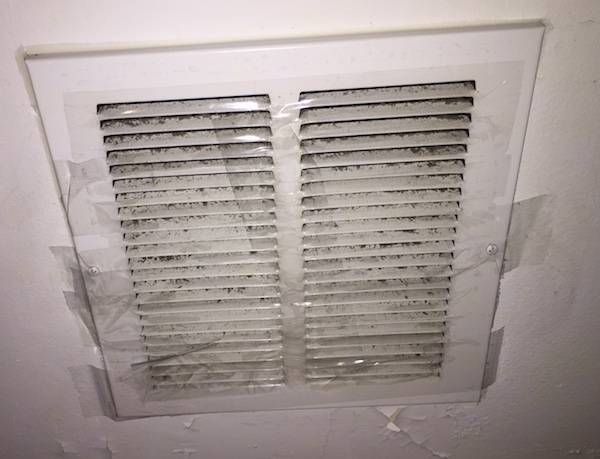 We have a separate HVAC system that feeds the attic and second floor. I covered up all of the second floor vents and returns with clear packing tape. About a week later I noticed something I had not expected. 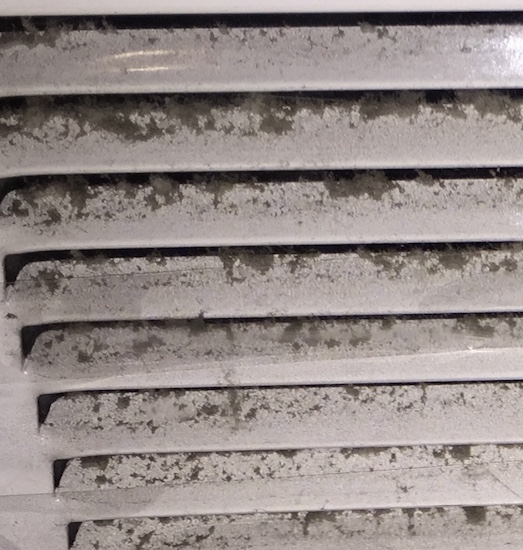 The insulation dust was all over the sticky side of the tape. I had felt the insulation in the air, but I didn't think it would build up that much. Some of the vents only had a little bit of the gray insualtion on it. 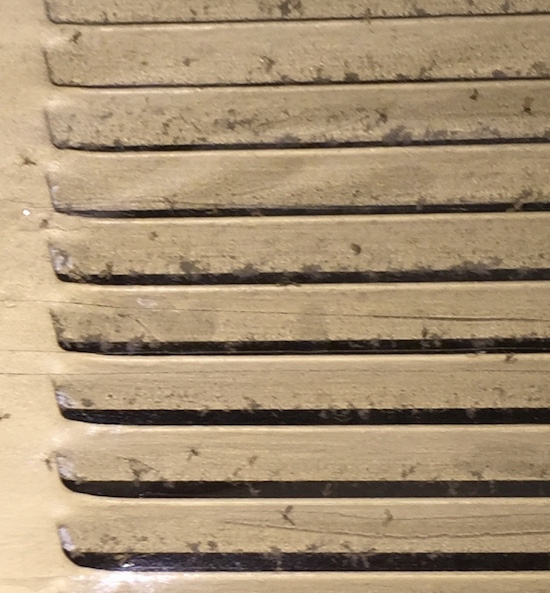