Most of us have heard at one time or another someone talking about indoor air quality. Often what is being discussed are things like mold, mildew, fumes, dust, dust mites, dog dander, cat dander, cockroaches, perfume, pollon, tobacco smoke, household products, pesticides, radon, carbon monoxide, asbestos, formaldehyde, lead, and outdoor air pollution getting into the home. But there is something else that is just as wide spread and perhaps more dangerous that people rarely think of, airborne fiberglass in the form of small particles. It's such a wide spread problem that just about everyone encounters it, often on a daily basis.

After years of struggling with chronic health issues, I finally made the connection that my symptoms were caused by poor indoor air quality, aka sick buildings. I had moved my office to a building that had a much higher amount of fiberglass in the air and I started noticing the difference between the air in the office building vs. other places. Fiberglass is airborne all over and I had been used to living in it. This higher quanity made it possible to begin making the connection between indoor air and the way it made me feel. 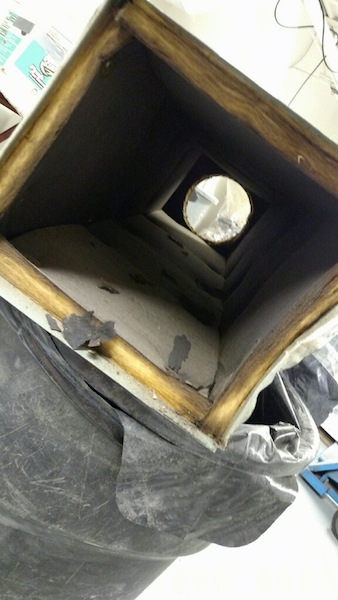 I began to pay attention to when symptoms would come and go. They would come when I entered certain buildings and go away when I would leave. In the worst cases they would not completely go away until I took a shower and washed my clothing. This is what some call sick building syndrome (SBS) and sick home. When we began to remove the fiberglass from the office building it became even more apparent. I could tell the difference in air quality from room to room. My immediate reaction is lungs tighten/ache, eyes burn, face goes numb, feeling like water got up my nose, top teeth feel loose. When I was younger living in different houses I would get flare-ups of all of the symptoms at one time that would last for months and sometimes years. I later realized they were all very similar to Fibromyalgia symptoms and the chemical culprits were benzene, a low-lying VOC (volatile organic compound) and phthalates, a semi-volatile organic compound (SVOC). My illnesses were from microscopic glass and VOCs.

I had been living with these symptoms from the time I was about 12 years old and had moved my bedroom to my parents attic until I was in my mid 40s. In my long quest to figure out what was making me sick I never once thought about the air. Airborne microscopic particle fiberglass fibers floating around, fiberglass poisoning. Fiberglass is also sometimes called glass wool and man made mineral fibers (MMMF).

Read more about how we figured out the cause was fiberglass.

Things like camp fires, cigarette smoke, gas fumes, car exhaust and paint fumes do not bother me. I have also been in a room full of visible mold without any reactions.

My allergist said it is not an allergy, but rather an irritant. My body cannot handle tiny microscopic pieces of glass with a binding agent attached landing on my body and going down my lungs. Some of the particles are so small they bypass the lungs and go into the blood stream. They say you have to magnify it 2,000 times to actually see it, so small that it travels much like the way a smell travels. Imagine a rotting mouse behind the wall, you can seal your wall all you want, the smell still gets out. Small fiberglass dust particles stay airborne longer than the average dust and it stirs up easily with air movement. 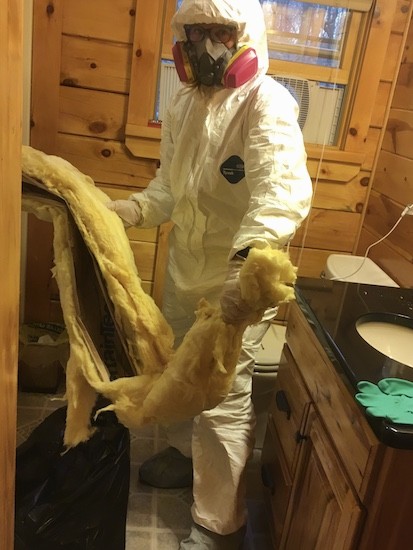 I have found that most people cannot feel it or are unaware of it in the air. Most are oblivious. But it still lands on their skin, clothes, gets in their eyes and lungs and blood stream.

It is my belief that there are others who can feel it, too. They have asthma or other health issue such as irritable bowel, and/or restless leg syndrome and accept it, without thinking of what could be causing it. They do not know to consider that it could be caused by breathing in invisible small chemical laced glass particles floating in the air taxing the liver and creating inflammation. When toxins build up in the blood stream a wide range of things can develop.

An example of someone feeling the effects but not realizing it, when one goes to a restaurant and spends an hour sitting at the table. After they leave they feel sick. They blame the food when in reality it was the poor indoor air quality that their body reacted to.

Fiberglass can be lined on the inside of ventilation duct work where air blows past it, inside the plenum of an HVAC system, laying above ceiling panels, get sucked into ventilation air returns, and even come out wall sockets from behind the walls if the air flow is going that way (negative air pressure). It's often shoved in attics, lined in basements and cracks without being sealed and inside roof shingles. Mice get behind walls and carry the fiberglass to different sections of your home as they make their nest with it. It is often inside ovens and dishwashers and used as filters for heaters and air conditioners along with many other uses. This exposed insulation can and will get into the air floating around in tiny microscopic particles that cannot be seen with the naked eye. I believe it plays a big roll in the high number of asthma cases. Often doctors cannot pinpoint the cause of a person's asthma and in some cases it's simply poor indoor air quality in a place or places the person frequents. 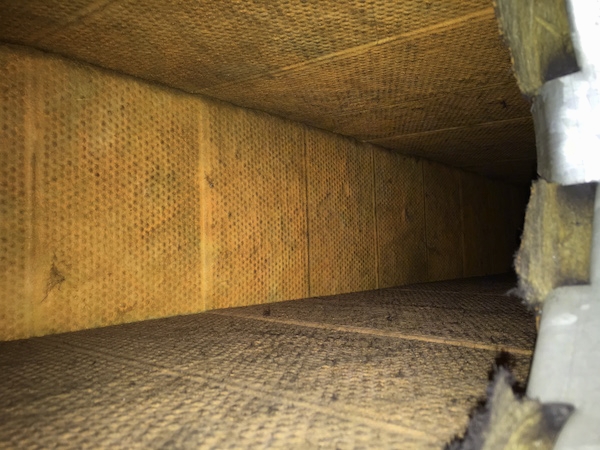 A fiberglass lined duct. Notice the fiberglass is on the inside of the duct where the air blows past it. As the unit ages the fiberglass begins to break down and becomes airborne. Older buildings with these types of ducts are the worst offenders. This was very popular in the 1970's and is still being used today in some construction. 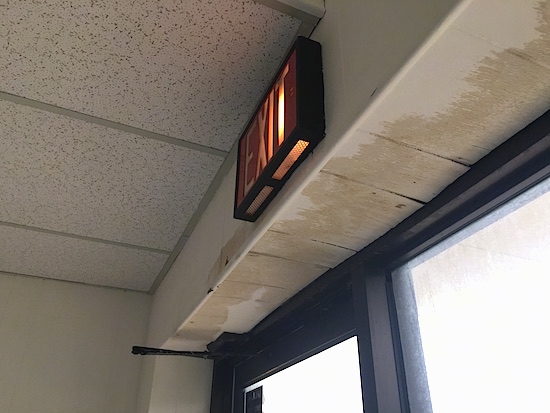 Areas that have had water damage are especially susceptible to airborne fiberglass. When the insulation gets wet it accelerates the break down process.

Some of the buildings that have fiberglass on the inside of the ducts have such poor air that I myself do not have to actually be the one to go in them to feel it. If I stand next to a person or worse, give my husband a hug after he has been in the building I get a reaction of coughing and numbness and sometimes an achy chest depending on how much exposure I received. The fact that someone else can bring it out of the building on their body and clothes means it is most definitely airborne inside that building. The clothing worn by the people who enter these polluted buildings often get the microscopic particles intertwined with the fabric. The fiberglass can never fully be washed out.

If I spend the day in a high concentration of it, the next day my bowels are irritated. 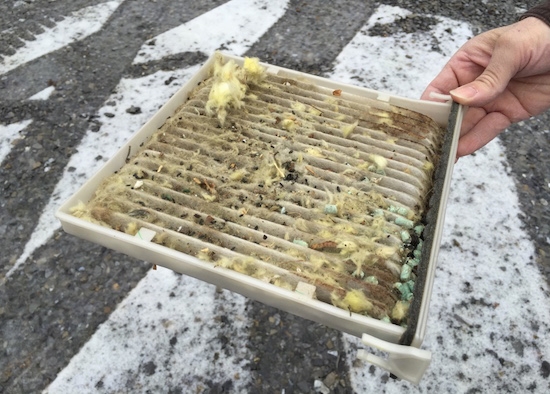 The cabin air filter from a car that I could drive in but suddenly could not. It had bad air coming from the vents. This vehicle gave me an asthma attack, coughing non-stop while in the car and left me nauseous, my skin numb and chest aching. Turned out a mouse had built a nest with fiberglass in the air ventilation system. Once it was removed and cleaned with a new filter in its place I could drive in the car again with no issues.

I can stand next to a roll of fiberglass insulation without any reaction. It's when it becomes airborne that the health problems occur. When it does I feel it, where as the other people in the room usually cannot. Or they cough but they do not know why. Whether they can feel it or they cannot, the person is still breathing in the tiny glass particles. Invisible the way carbon monoxide and radon are, it is there, they just don't know it. Even if they cannot feel it, it's very bad for their health.

I have been outside, downwind from a fiberglass polluted building and have had the symptoms start up as the air from the building escaped. I have also felt it in the air coming from home attic vents. If I didn't know any better I would go for an inhaler. However, now I know to just leave the area to a place where the air is better, and the sympoms go away on their own.

I have noticed that fiberglass contamination is always worse on humid days. I am assuming it is because just like a smell, the moisture carries the microscopic particles. Not just on the inside of the structure, it leaves homes and buildings through cracks and vents making it appear the humidity itself is what causes the problem, when in reality it is what's in the air. Water damaged fiberglass insulation is one of the worst offenders, so perhaps the moisture in the air accelerates the break down process. 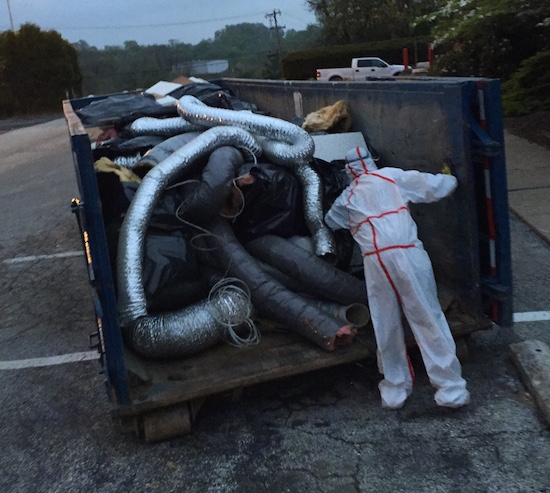 Inhaling fiberglass is known to be hazardous to one's health. This goes undisputed. It is the reason why people who work with fiberglass must wear a hazmat suit (hazardous materials suit). What the average person does not realize is how often they are breathing it in, sometimes in their own home, church and place of employment.

I am one of the people who can feel it. I always have been able to feel it, but it took me until I was in my 40's to figure out exactly what it was that was causing my reaction. Once I did, it suddenly all made sense, including all of the trips to the ER only to feel better once I got there. It is unclear whether or not I react to the glass itself or the binding agents or other chemicals added to the insulation. In my head I have a scale of 1 to 10. One being a place that has a little bit floating around, which is irritating but tolerable, to a building that is a 10 which I cannot be in for more than a few seconds before I am coughing and trying not to throw up. The worst offenders leave my nose throat and lungs feeling raw, my chest tight, my stomach nauseous, my skin numb and my eyes burning. If I stay long enough my ears start to ring and I get dizzy. All while others walk around the same building unaware of the bad air. I'm still trying to figure out if it's a blessing or a curse.

If you look up "side effects of airborne fiberglass" and "air pollution irritable bowel" you will discover how important it is to check not only your own home, but your place of employment along with places you frequent.

After removing the fiberglass from our home and place of work and avoiding exposure as best we can, my husbands 26 long year battle with ulcerative colitis also disappeared.

While everyone seems to have their panties in a bunch about things such as second hand cigarette smoke, we are all at one time or another breathing in glass.

This website is not here to convince you that breathing in airborne fiberglass is harmful to your health. Everyone already knows that. It is here to inform you of how many places you go where you are breathing it in.

Like lead pipes and the Roman Empire, someday we will look back in astonishment at how we put fiberglass inside of our air ducts.